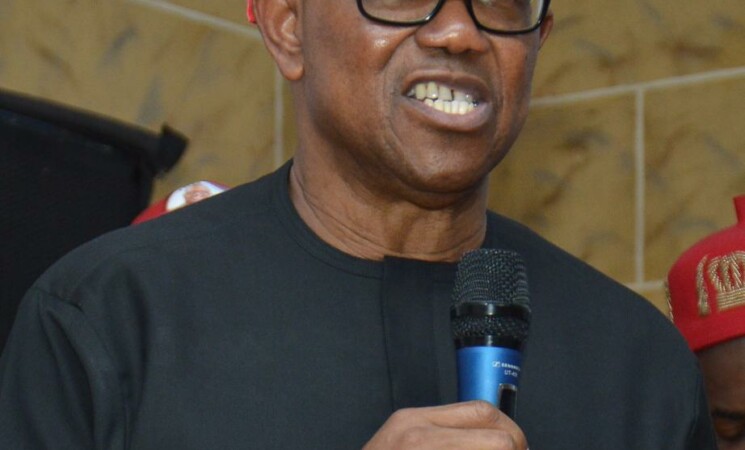 The Peter Obi Support Network (POSN) has called on Nigerians to shun the divisive utterances of the presidential candidates of the ruling All Progressives Congress (APC) and Peoples Democratic Party (PDP), Bola Tinubu and Atiku Abubakar respectively, and rally around the Labour Party candidate, Mr. Peter Obi to rescue Nigeria from total collapse.

It said the APC and PDP should be telling Nigerians how they would rescue the country from the path of a precipice that it is heading, rather than polarizing the country along ethnic and religious fault lines with their divisive utterances.

POSN which stated this in a statement issued on Friday, and signed by its Spokesman, Mr Sani Saeed Altukry, wondered how those candidates could unite Nigerians after dividing them if they eventually win the election.

The group asked Nigerians to compare the statement of people driven by selfish ambition and those driven by a desire for nation-building while making their choice for the next president of this great country.

"Mr Peter Obi is using a campaign to unite. His preaching, teaching and messages of hope have made many Nigerians start seeing their Hausa, Yoruba and Fulani neighbours as brothers and Nigeria as their only country which must be repaired and made habitable by them. It is happening before the eyes of everyone.

"But Tinubu and Atiku camps are using divide and rule approach as their campaign strategy. Because of Atiku and Tinubu's blunders, Nigeria has been divided far more on religious and tribal lines than ever before. The same mistake was made by President Muhammadu Buhari.

"When you divide the people in order to win the presidential election, how will you be able to rule the already divided people when you finally become the president," the POSN queried.

The group quoted some of the statements credited to those candidates like Tinubu who stated: "Labour Party members and supporters can never rule us, they will Labour till death."

"Atiku was also quoted as saying, “Obi is not known in the North; will remain unknown by the over 90 per cent of northerners who do not use the internet and can never be voted by the northerners."

In contrast, Peter Obi has said, "We shall depopulate the ranks of terrorists by ensuring enhanced, quality and equitable access to education to all our children.

"Our youths Must be freed from the slavery of overt dependence on handouts from politicians by creating jobs and business opportunities.

"We will create a people's economy. The economy is not merely doing well on the books of analysts, but the economy that does well in the people's stomachs.

"The youths have become easy prey to terrorist recruiters because they do feel the love of this nation towards them. We shall show love to our youths and make them proud of their heritage as Nigerians.

"I have no greater pride than being Nigerian and making Nigeria great again is my greatest passion."
The above statements attributed to the Labour Party candidate mark him as a different type of great politician that Nigerians need today, POSN concluded.

Close
POSN uses cookies to give you the most relevant experience. By clicking “Accept All”, you consent to the use of ALL the cookies.
Cookie SettingsAccept All
Manage consent

This website uses cookies to improve your experience while you navigate through the website. Out of these, the cookies that are categorized as necessary are stored on your browser as they are essential for the working of basic functionalities of the website. We also use third-party cookies that help us analyze and understand how you use this website. These cookies will be stored in your browser only with your consent. You also have the option to opt-out of these cookies. But opting out of some of these cookies may affect your browsing experience.
Necessary Always Enabled
Necessary cookies are absolutely essential for the website to function properly. These cookies ensure basic functionalities and security features of the website, anonymously.
Functional
Functional cookies help to perform certain functionalities like sharing the content of the website on social media platforms, collect feedbacks, and other third-party features.
Performance
Performance cookies are used to understand and analyze the key performance indexes of the website which helps in delivering a better user experience for the visitors.
Analytics
Analytical cookies are used to understand how visitors interact with the website. These cookies help provide information on metrics the number of visitors, bounce rate, traffic source, etc.
Advertisement
Advertisement cookies are used to provide visitors with relevant ads and marketing campaigns. These cookies track visitors across websites and collect information to provide customized ads.
Others
Other uncategorized cookies are those that are being analyzed and have not been classified into a category as yet.
SAVE & ACCEPT
Important Notice!

Thank you for believing with us that a new Nigeria is possible with #PeterObi. We have a target to raise a minimum of 6 billion Naira for Mr Peter Obi’s presidential bid and, we can only do that by donating a minimum of N1,000 each to make it a reality. Meanwhile, we encourage you to give more, if you can.